Moray-based author Sarah Jane Douglas will be in conversation with XpoNorth’s Writing and Publishing Sector Specialist, Peter Urpeth, and literary agent ,Jenny Brown, about how her acclaimed memoir Just Another Mountain came to be written and its route to publication and to national and international media interviews.

In 1997, at the age of 24, Sarah lost her mother to breast cancer. Alone and adrift in the world, she very nearly gave up hope – but she’d made a promise to her mother that she would keep going no matter what. So she turned to the beautiful, dangerous, forbidding mountains of her native Scotland. By walking in her mother’s footsteps, she learns to accept her own troubled past, finding the strength to overcome her grief – and, ultimately, to carry on in the face of her own diagnosis twenty years later. Searingly honest and utterly relatable, bringing the exhilarating triumphs and challenges of mountain walking to life with wit, charm and raw candour, Just Another Mountain is a story of hope and redemption, of a mother and a daughter, and of how we can learn both to live and to love. Sometimes, all you can do is put one foot in front of the other … and just keep walking. During the writing process Sarah Jane contacted and met with XPONorth for advice on developing and publishing her work. Just Another Mountain is published by Elliott & Thompson and the discussion will be followed by a signing session. 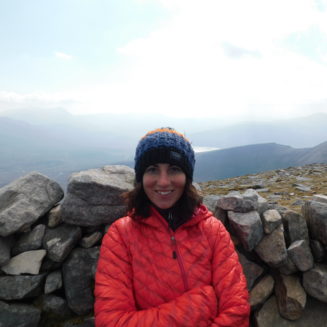 Sarah Jane Douglas writes the popular blog Smashing Cancer in the Face. She is an artist and former teacher who lives with her two sons and partner in an old fishing village on the northeast coast of Scotland.